Yet God has made everything beautiful for its own time. He has planted
eternity in the human heart, but even so, people cannot see the
whole scope of God’s work from beginning to end.
– Ecclesiastes 3:11

I can tend to get a little lost at the end of the calendar year. I forget the plot a bit. It happens every year and still every year it’s a surprise. I long for an extended break as mid-November approaches and look forward to time with my daughter. But midway through the break, I get restless and become paralyzed by the stretch of open hours. I wonder if what I’m doing for work and ministry matters. I think about relationships past and feel a combination of regret and nostalgia. I think about money and whether there will be enough. I wonder what my purpose is and whether I’m fulfilling it. I think about decisions I’ve made and whether they were right. I don’t mean to be overly dramatic, but I become a little unhinged.

And then I think about puzzles.

In January 2013, I tried a case in federal court in San Diego. It was the first case I’d ever tried in which I was the lead lawyer, which meant not only increased pressure, but also the ability to present the case in the way I thought was best. So, when I stood to give my opening statement, I began by showing the jury this giant puzzle piece: 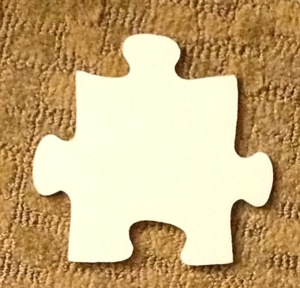 After all, the jury has a tough job—even though events take place in chronological order, not every witness was there for every event, and yet each witness generally only testifies once.  As a result, the jury hears the story in pieces—part of the story from one witness, another part from another witness, and so on. No witness can share every aspect of the story from beginning to end. In this way, the story told at a trial is very unlike the stories told in books or movies. Telling a story through trial testimony is more like putting together a puzzle. The case I was trying was no exception—the evidence would be presented in pieces, out of order, and sometimes without any context. Also, there was no picture on a box sitting nearby so they knew what the final picture looked like. Not until the very end would they know the whole story and how all the pieces fit together.

Life is this way—the evidence is presented in pieces, out of order, and sometimes without any context. And there is no box anywhere that shows the final picture. The lack of routine and structure around the end of the year makes me lose sight of the fact that all the pieces will eventually come together into something beautiful and stunning and that every piece had a purpose in the bigger story.

One of the most meaningful gifts I received this year for Christmas was from my niece Lucy. It was this puzzle, which I put it together today: 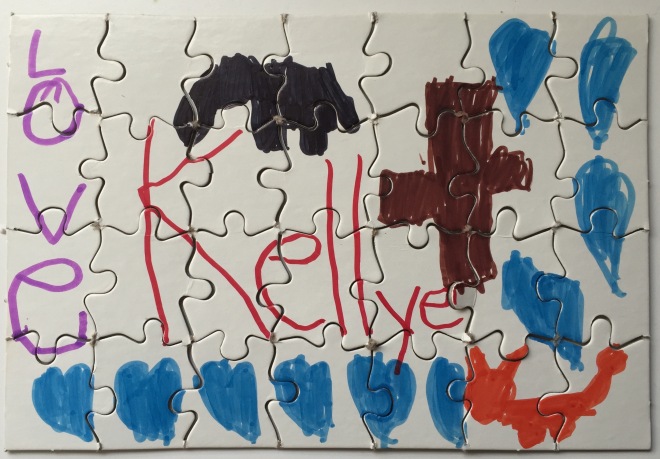 Without even knowing it, Lucy reminded me what all the pieces point to—love and the crucified and resurrected Christ (I’m not as convinced about the pets)—and that eventually they will all fit together.

One thought on “How All the Pieces Fit Together”