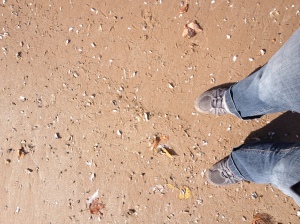 This is the second fear my friend identified as we talked about why the idea of becoming a follower of Jesus scared her:  her friends and family wouldn’t get it and she’d be alone.

The best response to the fear “my friends and family wouldn’t get it,” is: “Yes, that’s true.  Most of them won’t.  Some of them will distance themselves from you.  And it hurts.”  To say otherwise would be false.  The next question, quite naturally, is: “Then why would I do it?”

The only way I can think to answer this one is to explain why I did.  The truth is that for me, becoming a follower of Jesus did not originate with the thought that I had offended God and needed a way back to him.  I suspect this is true for most people today.  It did not cross my mind that I was separated from God because God was not my frame of reference.  My frame of reference was what the world taught me equaled success: a husband, a child, a house, cars, money, approval, gadgets, elite airline status, good wine, and a New York Times subscription.  Upon acquiring each of these, though, I became increasingly aware of their inadequacy to still me, and their tendency to create a craving for more.  I didn’t know what to do with my dissatisfaction, and so I unknowingly slid into a years-long period of disintegration and darkness.  There were still moments of light and laughter and hope, but really, I was lost, bouncing from one thing to another to fill my time and thoughts.

Eventually, I began to doubt that what I had been told by watching the world was true.  I could see that no matter how much I tried to love my daughter, and how many new things I acquired, trips I took, bottles of the best wine I drank, or men I loved, I still had a gaping hole inside of me.  I knew in the depths of me that my purpose could not possibly be to make money, acquire stuff, take some cool trips, and then die.  My purpose could not be just to give birth and raise my daughter because she would grow up and move out, and there I would be.  I also knew that my purpose could not be just to enjoy life because I had the sense that I was made to do something that mattered.  It crossed my mind that loving people could be my purpose, but I had not done that very well so far in my life and sometimes, I didn’t feel like loving people.

So, knowing my friends and my family might reject me, why did I still decide to follow Jesus?  I needed to.  I lost some friends and some members of my family don’t get me or my decision.  But I’m not alone.

If someone asked you why you decided to follow Jesus, what would you say?

Did you know some people you cared about might turn their backs on you?  Then, why did you do it?

2 thoughts on “My Friends and Family Wouldn’t Get It”